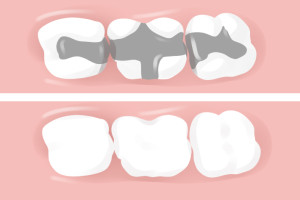 It’s important to determine when a filling needs to be replaced. Dental fillings, also known as dental restorations, are used to replace tooth structure that has been lost due to tooth decay. Dental fillings generally last for years, but no filling lasts forever. Every filling will eventually fail, requiring replacement.

What Causes a Dental Filling to Fail?

The human mouth contains a lot of bacteria. Bacteria is found in saliva, as well as in dental plaque (a film on the teeth and gums). If the seal between the tooth and filling is compromised, particles of food and decay-causing bacteria can find their way in between the tooth and filling. Brushing alone cannot eliminate the bacteria that has gotten under the filling. The buildup of bacteria in that area will cause further decay to the underlying tooth along the edge of the filling and underneath a filling that needs to be replaced.

A Failed Filling Can Lead to Infection

It is extremely difficult, if not impossible, to detect worn fillings and broken seals with a self-examination. However, a dental examination can usually detect damage to fillings in the early stages before too much damage has occurred. X-rays will reveal decay under fillings and between teeth that cannot be seen directly. A failed filling should be replaced immediately. Too many people make the mistake of waiting until a filling becomes painful before seeing the dentist. Regular dental exams can monitor your fillings to ensure that worn fillings and broken seals are discovered before further damage occurs to the tooth.

No other posts on this topic

Learn More About Our Practice Here